The Jade Fighers, are a group of warriors located on Eden. Their duty is to protect Eden from higher forces and other major threats. Roku is the de-facto leader, since he is the most powerful and is the most prominent student at the Jade Palace. He also started the fighting force after witnessing the future. They

are a small force of 3 people, but are very powerful and they take outsiders so their numbers may grow. But Roku is very selective to make sure that the group remains true to its purpose. Their main purpose above all, is to protect Eden and the Jade Palace, and to uphold peace. They stay out of affiars such as wars, but when it comes to protecting their home against things such as monsters, magical beings, or even evil gods. They are up for the challenge.

Roku started the group from witnessing what could come, and saw that the UCR has times when it is too busy with outside threats to protect every inch of the planet. So he decided to gather the strongest students at the Jade Palace to form the Jade Fighters, he made sure that the people he chose are pure of heart, and or sworn to hold the peace and not to abuse their power. In other words, trying their best to not over do the fight and destroy mass area's pointlessly. Its a rather new group, being only formed for half a year, but they are ready to arise to the protection of Eden.

These are the main fighters of the team, and the ones who are most active and or started the team.

These are people who support the group, or team up with them momentarily.

Master Chikan - Is a supporting member, he was egged to join as a Primary member by Lizzy, but he claimed he was "Too Old"

More will be added as time progresses

To be added as they encounter dangers

Alien Rush Attack - Roku and Obo simutanusly attack the opponent, then Roku kicks them. Sending them stumbling back and Obo fires a energy beam at them.

Bestfriend rush attack - Roku and Lizzy both attack the opponent with a flurry of kicks and punches, then Obo comes in and finishes them off

Green and Gold special - Roku and Obo both power up to their Super forms (Super Namek and Super Saiyan) and sends a flurry of kicks of punches at the opponent, then they both fire their signature techniques at the opponent. 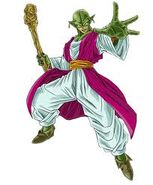