While the Cornerians would rather remain peaceful, many have mistaken such a desire for weakness. As such, they maintained a rather advanced military in case of attack. Their Navy enjoyed the company of skilled pilots.

Their army is well armored and equipped. While it has established several military bases around all of its systems, its Home Division positions itself so that it can defend the Capital in the event of an attack. Prior to Corneria's downfall, it was the second most powerful military in the Andromeda Galaxy, second only to the Vagan Empire.

The Cornerian Army is the primary defense force of the Cornerian home and colonies. They were formed shortly after the formation of the Cornerians themselves. Even though the Cornerians are peace loving, they had a formidable military to defend themselves. This had often lead to others demise. They were often thought to be weak and non-advanced, despite the obvious shows of technological advances of their society. A good example is their unique means of propulsion, the Gravity Diffusion drive and helium fuel cell. The military was split into 2 branches. The Army and the Navy. The Air force and Marines were just made into a section of each branch. Hence the Cornerian Army Air Corps and the Cornarian Naval Marines.

The Army is their primary means of land combat. They were highly trained and advanced. Most soldiers being graduates of the Military Academy. The Army is divided 3 sections. The Infantry, Mechanized Infantry, and Heavy Infantry. All soldiers are trained in infantry combat then transferred and further trained in different jobs. The normal infantry fought on foot. The mechanized infantry fights on foot but also handles Armored Personnel Carriers, light tanks, and light AA. The Heavy Infantry is trained to use heavier weapons, such as tanks, heavy Anti-Air, orbital defense stations, and anti-ship gun emplacements. There is also a small sect, known as the Cornarian Orbital Drop Troopers. A highly trained sect of soldiers used to drop behind enemy lines from aircraft or from orbit. They were the special operations section of the Army. Photos of the Army will be shown in the Gallary.

Today the Cornerian Army is dissolved and many of its former members serve as low skilled, under equipped and expendable fodder for the CGE.

General of the Army 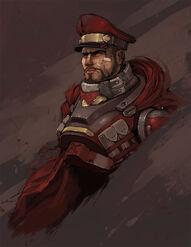 General Howard G. Benson was the commander of the Army. Former CODT and graduate of the CMA, he was a highly decorated soldier and long time veteran. He commands the Army with no room for error. He was very passionate about his job and would defend his nation with his life. He was killed during the Exon Invasion of Corneria, dying alongside his men in a last stand at the Cornerian Capital.

General of the Navy 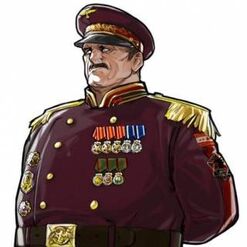 General Benjamin  H. Carson. Also a graduate of the CMA. He is a Naval Marine who later reenlisted as a Navy Seamen. Soon worked his way up to be promoted to ship captain, and later General of the Navy. He wass a no room for error leader who will defend the Cornerian ways with his life. He commanded "The Inquister" flagship of company A. They are assigned to defend the home world of the Cornerians. He was among the first to fall as the pride of Corneria was obliterated in minutes.

The Cornerian operates their own fleet of space craft. They are the orbital defense section of the military. Like the Army, there is no Marines. The Marines are sectioned and included as part of the Navy. The Marines conduct ship boarding. While the Navy supports. The Navy has the joy of operating some of the most advanced ships known to the Andromeda system. Being propelled by gravity diffusion and being some of the fastest ships known. The Cornerian Marines are trained in the art of using boarding craft to board and take over ships. Turning the tide of battle. They are trained in  using transmat systems to transmat onto bigger ships and taking them over. The Navy uses a formation called "Battle Formation V" a unstoppable formation where the ships get into formation and by using their advanced weaponry and speed. They use a  speed and force to overwhelm and break through enemy lines. Kinda like a Blitzkrieg strategy.

The Cornerian holds a joint research with the local Space Dynamics weapon manufacturing company. They research and upgrade their weapons and tech. They are currently trying to make super soldiers. A soldier that would be a think tank. Not as cumbersome as the heavy siege infantry but as mobile as the shock troopers with the power of the siege infantry. It is currently in the research phase. Trying to compact the siege infantry armor to a more compact practical model.

Gallary of the Army 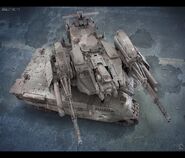 Cornerian Mechanized Infantry fighting in coop with the Air Force

Gallary of the Navy

Cornerian Air Force working along side the Navy 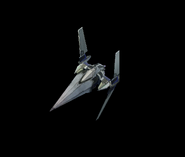 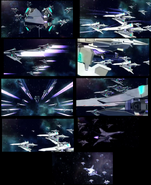 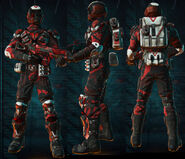